Everybody who knows anything about Kolkata knows that the pujas are the hottest thing the city has to offer. Non-resident Bengalis, probashis all over the world, television and print ads promoting tourism in Bengal will ensure you actually believe in it wholeheartedly. And probably, in their mind, they are right as well. In fact bongs would unanimously swear by the energy and happy vibes that grip the city during the build up to the pujas. They are the cultured bangali forming our majority and I hold nothing against them, in fact look upon them in awe when we watch streams of families all decked up and walking from pandal to pandal beating the humidity and crowd. The actual puja experience can be a bit different though, if you’re the types that doesn’t have the tenacity for crowds, humidity or endless traffic jams. That’s kinda us – kinda ‘uncultured’ to some. Black sheep of the community. We love the Puja in the air feeling but the thought of the four days of crazy frenzy freaks us out every year, so much that we start planning our getaway hideouts long before it hits us. This time however we were a bit distracted hence slow. So by the time we got around to bookings all places were booked out tickets were sold out or airfares had plummeted beyond middle class reason.

Now, just to give you a glimpse of what scares us, this is bagbazar sarbajanin on a relatively lightly crowded morning.

Long story short we could not escape and had to stay back, so we decided to make it as non-intrusive as possible. We made mental resolutions of how we will not relent to peer pressure and tire ourselves pandal hopping in the hot sun. Or stand behind long queues waiting to get a table at Bengali restaurants all of which (including the shittiest of them) being overbooked on the 4 festive days. Or get stuck in traffic jams for hours together. Nope we wanted none of that. I, for one, aimed at achieving a 100% abstinence from work, a very lofty aim that involves refraining from checking emails and politely declining calls from work. Whether I achieved it or not is another story but these were, in a nutshell, our plans.

The puja frenzy that usually begins on shasti began 2 days earlier this time, with the whole of Kolkata making the smart move of trying to check out the pandals before anyone else does. Just that they all did it together, so the results were counterproductive with people jostling at half made pandals where puja hadn’t even begun yet. We tried to go on about our lives treating pandals and traffic as byproducts rather than the object of our movements and that worked well.

This especially worked when we hung around in places like gariahat where we chose to venture in the mornings when parking or traffic wasn’t an issue and we could check out pujas such as Hindustan park or shivmandir which are usually large crowd pullers after sunset. The evenings were spent in salt lake when it was too early for crowds and stalls. The FD block Puja made a beautiful replica of the Durbar Square in Nepal, a place I had marveled at days before it came down in the ruthless quake. 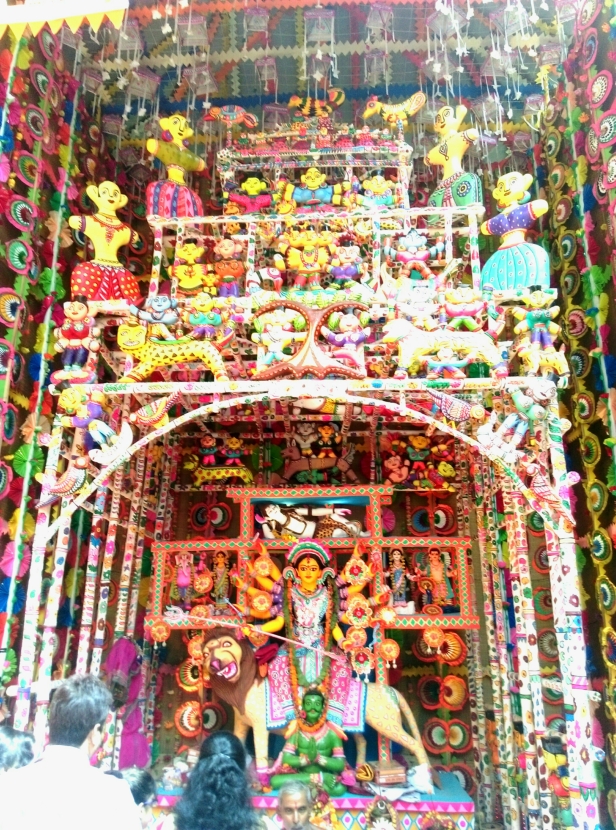 Of course there was a day on ashtami, when a Saree inadvertently became the object around which our itinerary revolved. It was a certain white Saree with a stout red and black border that I really looked forward to wearing. However on the D day I  couldn’t find the matching accompaniments so I fought with the world and then managed to drape it up – almost. (Tempted to post a pic here but what if I get famous or infamous because that’s easy, grow enemies and get hunted down :/)

We planned to check out a bonedi barir pujo that day and headed to the sovabazar palace in north kol. This puja by the deb family is grand and the palace grander. Incidentally there are two palaces in the vicinity with an interesting bit of history connecting the two.

The history of the Puja

The second palace is very pretty, there was a board urging not to photographs without permission. But the kind of people that we are, I looked around to see everybody unabatedly clicking away. Normally I would say to each his own, but boss it’s someone’s house and they have a rule and as a guest you need to follow it and show some respect to the folks who have opened their gates for your entertainment. In a place with bouncers they would have thought twice. Unfortunately nicety or bhodrota is a rarity these days and what was once considered a strength of character now puts you at a disadvantage of being run over by every Tom, dick and harry. While we wonder at these lovely monuments from the past, a city is the sum total of its heritage and it’s people. Wonder where we went wrong.

Moving on, from ashtami night I was down with the flu, so I do not remember much venturing out. But luckily I had company at home with a steady stream of visitors – family and friends visiting from various outstation destinations. On the few outings where we had to eat out, the best bet was the continental places and coffee shops since everyone was queuing up for bongfood. We skipped our way to the French outlet Delices and really loved having our pizza and risotto lunch in peace and relative silence (away from my bong brothers noisily chewing fish heads and expertly arguing over shorshe bata na kaliya, ilish na chingri and “dinner kothaye korbo” at the bong outlets next door)

In short, in most cases we tried to gauge the popular crowdpullers and attempted upstream. For the most crowded days, we ensured we have visitors at home so that we don’t miss the festive mood and yet avoid the crowd.

For ashtami anjali and the sindoor khela on dashami, we just head to the nearest pandal wherever we are at the time these announcements are happening. Keeping oneself flexible for such things help relax a bit on the microplanning, because after all these are holidays so who wants to plan!

P.S This post is dedicated to all those who are tired of being told by the society, including friends family and strangers, on what they should learn to love and how they should behave during festivities. Believe festivals are meant to be happy times for all, so just do your things, drop the judgement and let people be.
P.s 2 blog posted from mobile in an unavoidable horizontal situation from a bed so pls excuse photo quality and formatting errors