Planning for our upcoming holiday season has been an emotional roller coaster ride for us this year. First, we planned a vacation to Bhutan with a lot of uncharacteristic advanced planning, pulling our collars at having gotten the best deals of the season and all that jazz, only to be let down by the flight operator whose sudden fate looks rather bleak. Not knowing what to do, since they have been cancelling flights left right and centre, and have still held on to ours, we decided to not become lying baits and act instead to salvage what was left of our holiday plans.

As it now appears, while we will celebrate Christmas in the city, the new year will be spent in one of our favorite destinations Bangkok. There is something comforting about visiting a place you already know your whereabouts. It is more comforting when you haven’t planned to run around your itinerary in a hurry to know the entire country in a jam-packed schedule. We do not know how much money we would be losing in the previous trip we just cancelled, but we do know our holidays would not go waste. Fingers crossed.

When KFB’s Christmas event was announced, it immediately had reminded me of things red and white, taking out the silver, rum spiked puddings and huge roasts adorning the table, surrounded by large chatty families and lots of laughter. Did I miss something? Of course I did. Drinking! Lots of wine, overflowing, self-repleneshing, copious amounts of dark warm alcohol to go with the merry spirit of winter evenings.

To go with the festive theme and have my own little celebration at having salvaged the vacation, I decided to make the Victorian Mulled Wine. This version uses port, something I am quite fond of. 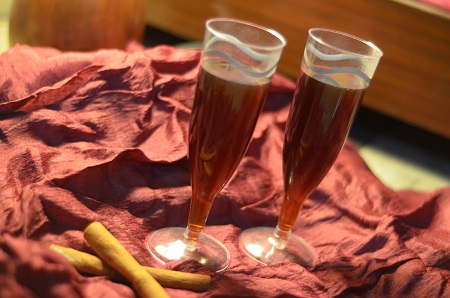 What better way to ring out the old and ring in the new! Merry Christmas and happy vacations everyone!